An Introduction to Ancient Wessex:

The South-West of England is simply full of fascinating monuments of our ancient ancestors. Indeed, Cheddar Man is the oldest human skelaton in England, dating back to 7150BC and discovered in the caves of Cheddar Gorge in South-West England. He is but one of many human skelatons that tell us that this part of England was perhaps the most important or popular place to live 10 thousand years ago… but why? Perhaps the answer can be found in a huge changing landscape from the end of the last Ice Age, resulting in mass flooding. The creation of bodies of water like The English Channel and The Irish Sea would have driven our anscestors to the highest parts of Britain, namely Wessex and The Highlands of Scotland. In addition, five thousand years ago something special stood out about the South West of England to hunter-gatherers. Whilst Britain’s landscape was entirely forested land, this area stood higher, prouder than the rest of England, and yet was naturally open space. From The Neolithic Age until now, people have always been drawn to the region we have come to know today as Wessex. Visit this fascinating Ancient landscape to discover the importance and beauty of this part of the world.

The name Stonehenge echoes so many different meanings throughout the world. What is it? Who built it? Why?

We will never be able to fully answer so many interesting questions and theories that have been introduced over the last few centuries, but we can make educational guesses as to who built this incredible temple.

Stonehenge overlaps a period of time we call the New Stone Age (or Neolithic Age) with the Bronze Age. When Stonehenge began, it was more than likely just a simple cemetary. By the time the stones arrived, Stonehenge became the most sophisticated calendar and ceremonial site in the world. This can be seen through the echoing celebrations of the Summer and Winter Solstice th at takes places every year.

Perhaps an insight as to why the sun became more important to humans can be linked with the advancing technologies of the day. As we moved towards the Bronze Age (circa 2500BC), we see a much more settled society that remain in one place. This is undoubtedly linked in with the introduction of farming, which also sees an increased importance of our orbit of the Sun.

Many burial chambers still remain at visible around the Stonehenge landscape. Whilst some burials may hint that Stonehenge was a temple of healing (For Example: The Amesbury Archer), it is likely that the Bronze Age Round Barrows represent a claiming of land and an identity which prior to this way of living would not have mattered as nomadic hunter-gatherers. These people are referred to as The Beaker Folk, as they are often buried with their drinking vessels. Bodies of the Beaker people can be seen in the Exhibition Centre of Stonehenge.

Woodhenge is a small circular earthworks around 2 miles East of Stonehenge which was first discovered in 1925 by the Welsh-born archaologist Maud Cunnington. Initial excavations implied this sight was perhaps a temple of sacrifice, with the effigy of an infant boy being discovered with a fractured skull in the centre of the momument.

In contrast to this early theory, in 1998 a Madagascan Archeologist by the name of Ramilisonina suggested that the sights importance may be to do with a ritual of life and death. Perhaps Woodhenge was the start of a ceremony where the recently deceased has their lives honoured in celebration, and as they moved towards Stonehenge they were preparing to enter into the realm of their ancestors with the representation of their spirits inside the stones. Indeed, this theory is one of the most popular today, as it resembles ceremonies that we even do today. 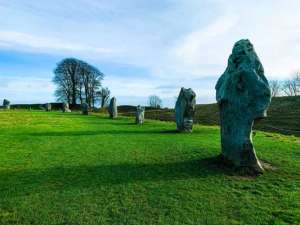 Avebury boasts the title as Europe’s largest stone circle. Incredible to imagine, but it is still free to roam and take in the energies that surround the monument.

Avebury may have been a sight for early forms of marriage rituals, or similar to Stonehenge, some sort of celestial calendar. The design of the henge itself hints that it was built to keep spirits inside the circle rather than being built as a defensive fortress.

Thanks to the efforts of William Cunnington and Alexander Keiller, we can enjoy this village today and touch the stones in serenety without the hoards of crowds often seen at Stonehenge.

Perhaps the most mysterious of all the ancient monuments we’ve mentioned so far is West Kennet Long Barrow. As the name suggests, it is a rather large (in fact the second longest in the country) barrow or burial chamber in Wiltshire.

Dating back as far as 3600BC, this barrow was in use for over a thousand years, so it may had had multiple purposes. One of these purposes was for ceremonial burials, as we have discovered the remains of at least 43 people of all ages and genders. Much of the remains excavated in the 19th and 20th centuries can be seen in The Wilthshire Museum in Devises.

Check out our Ancient Wonders of Wessex Private Tour