An Introduction to Castles in Kent:

Situated on the South-East Coast of England, Kent has always had an incredibly import part to play in Medieval History. From as early as 55BC with the invasion of Julius Caesar encountering the Cantiaci, Kent’s defences have been paramount to the protection of England from new invasions from the continent.

The French arrived in Hastings in 1066 under the forces of William The Conqueror, who brought with him the invention of a new type of fortress known as a ‘castel’. Over the next century, over 500 castles were built in England, entirely changing the landscape and everyday life. Many of these early medieval castles were built on a Roman Road called Watling Street, which went from Dover to London. Today, Dover Castle, Canterbury Castle, Rochester Castle and The Tower of London still remain on this important defensive route.

We’ve compiled a list of great castles that you might want to visit on a private tour.

Don’t forget… any combination is possible when you book with Tailored Tours!

Dover Castle is often referred to as ‘The Key to England.’ In its 800 year history, the outer walls have only ever been successfully breached once. Today it offers an amazing combination of both Medieval and World War history. The stone keep is the largest in England, and can be completely explored from the entrance to the roof. On top of the castle gives you one of the best views you’ll get of the English Channel; on a clear day you may even see France!

The Castle is also home to 3 miles of underground tunnels dug out during the Napoleonic Wars. These tunnels were used as underground hospitals, shelter, and communication barracks during the Second World War. There are two themed attractions run every 30-45 minutes for you to enjoy. One look at Leeds Castle’s exterior moat and architecture makes it easy to see why Lord Conway onced dubbed it ‘The Lovliest Castle in the World.’ It dates back to 12th Century, when the Crevocouer family built a small fortress near Maidstone. This was later purchased by King Edward Longshanks who converted it into a beautiful residence for his queen Eleanor of Castille. Eleanor’s inhabitance of the castle began a trend of Leeds becoming known as ‘The Queens Castle’, with each of them leaving their own distinctive features.

The last major renovation of the castle took place in the 1920’s and 30’s when it was bought by an American Heiress called Olive Paget. She adopted the name ‘Lady Baillie’ from her third marriage and used Leeds as a holiday home, as well as a place she would entertain famous guests from Charlie Chaplain to The Duke and Duchess of Windsor (Later King Edward VIII and Wallis Simpson). 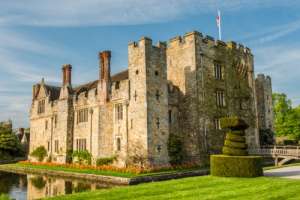 Hever Castle gets its name from the village it is situated in. The oldest mention of Hever is in 1270, but the main reason people are attracted to the castle today is its direct links to The Boleyn family. Anne Boleyn, the second wife of King Henry VIII, would have most certainly used this castle as a childhood home before she met the infamous king. Most of the castle was renovated by the Astor family in the early 20th Century, but it still remains open to viewing thanks to the protection of English Heritage. Its Norman tower-keep of Kentish ragstone was built about 1127 by William of Corbeil, Archbishop of Canterbury, with the encouragement of Henry I. Consisting of three floors above a basement, it still stands 113 feet high; the tallest keep in the country.

Rochester was one of the most important locations during The Barons War in 1215, where King John used the fat of 40 pigs to fire a mine under the keep, bringing its southern corner crashing down. Surprisingly the rebel Barons managed to hold on, although they were eventually starved out after resisting for two months.

Scotney Castle is an English country house situated on the River Bewl. Today it is protected by a company called The National Trust. The spectacular gardens are not only a Site of Special Scientific Interest, but also attract thousands of visitors who come to admire the Picturesque style it’s famous for.

The central feature is the ruins of a medieval, moated manor house, Scotney Old Castle, which is on an island on a small lake. The lake is surrounded by sloping, wooded gardens with fine collections of rhododendrons, azaleas and kalmia for spring colour, summer wisteria and roses, and spectacular autumn colour.

At the top of the garden stands a house which was built to replace the Old Castle between 1835 and 1843. This is known as Scotney New Castle, or simply Scotney Castle, and was designed by Anthony Salvin. It is an early and unusually restrained example of Tudor Revival architectural style in 19th-century Britain. Following the death of the resident, Elizabeth Hussey, in 2006, this house was opened to the public for the first time on 6 June 2007

Intersted in visiting Kent? take a look below at a selection of our best selling tours: