Things to do in Canterbury

Canterbury has always been at the forefront of Kent’s fascinating past; even the name itself translates to mean ‘The Kent People’s Stronghold.’ When The Romans arrived in Britain in 55BC with Julius Caesar, he noted that the tribe in the South-East of England were called ‘The Cantiaci’; meaning ‘the people who lived on the border of the island.’

After the collapse of Roman Britain, Britain entered into a period of time known as The Dark Ages where very little actual evidence of what happened exists. The most common story told about new settlements in the 5th Century involves two brothers called Hengist and Horsa who arrived as paid mercenaries to protect England against marauding Scots. This started one of the largest invasions of Britain ever to be seen, with groups like The Angles, Saxons, and Jutes claiming their own Kingdoms. Kent was to become one of seven Kingdoms created during these arduous times.

Nearly a century later, a descendant of Hengist called Ethelbert was raised a Pagan King of Kent and married a Christian daughter of the King of Franks called Bertha. It was agreed that she would be allowed to practice her faith in Canterbury, when a missionary sent from Rome arrived in the city. Saint Augustine converted The King of Kent and would go on to be the first Archbishop of Canterbury, bestowing important roles like coronations and weddings that they still have today!

The most famous Archbishop of Canterbury is Thomas Beckett. After a fall out with King Henry II over ecclesiastical powers in court, Beckett spent many years in exile before his eventual return to his Cathedral. On the 29th December 1170, tensions had risen to the ultimate order of his death by King Henry’s infamous words

‘Who will rid me of this turbulent Priest?!’

Beckett’s tomb would go on to be the most visited pilgrimage sight in The UK, making Canterbury a wealthy and vibrant city. It became the inspiration for one of the world’s most famous Old English Books ‘The Canterbury Tales.’

After nearly 400 years of attracting pilgrims to the city, King Henry VIII saw Beckett’s tomb as a symbol of the Catholic Church, and ordered its destruction in 1538. Today a candle is used to represent the tombs original position.

Today the cathedral still attracts millions of visitors from all over the world and is well worth going inside if you have time!

For inspiration on things to do and places to see in Canterbury, browse the links below to find out more about these great attractions.

Canterbury boasts some of the most impressive and complete city walls anywhere in England.

It’s a great way to navigate the city and connect with Canterbury Castle if that is on your list of attractions.

This is by far the biggest and best attraction that Canterbury has to offer.

Here you can see The Martyrdom, Beckett Candle, King Henry IV, The Black Prince and much more!

The Romans once had a vibrant settlement known as Durovernum Cantiacorum.

Today many Roman artifacts discovered are inside the museum, including a Roman Pavement and Courtyard House.

Today Canterbury is a very student friendly city, serving not one but 2 universities.

Many students have become local river guides and can take you around the river on a punt.

The West Gate dates back to 1381 and served as the main entrance to the city from London.

Today the West Gate serves as a museum and is well worth a visit!

Starting in London, the journey down to Canterbury will see you encounter 5 tales of love, infidelity, intrigue, courtship and death. Here you’ll experience medieval sights, sounds and smells, a quick and easy introduction to Chaucer’s Canterbury. 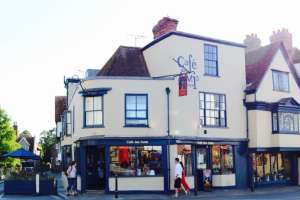 If you’re a big fan of Mexican food, you simply have to stop here for lunch! From the decor to the sharing platters, every part of this quaint little cafe is spot on for a lovely Mexican lunch. Don’t just take our word for it, this cafe has been publicly endorsed by both Gordon Ramsey and local actor Orlando Bloom. 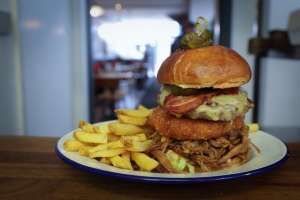 If you’re looking for something quick, local and close to the Cathedral, it’s definitely worth stopping here for some pulled pork. Starting from just £5, it’s easy to see why Pork and Co regularly makes Canterbury’s Top 5 ranked places to eat since opening in 2014. 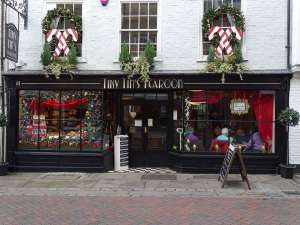 Canterbury itself has a certain charm as a typical English Medieval City. If this is the sort of vibe you’re looking for when visiting, I’d definitely recommend stopping for a bit of tea and cake in Tiny Tims Tearoom. This cafe recently won the Kent awards for best English Tearoom in the county and a small visit will clearly show you why.

Intersted in visiting Canterbury? take a look below at a selection of our best selling tours: