Things to do in Oxford

Unlike most major cities in England, Oxford has no Roman history. It may surprise you to find out that there was actually no Roman name for the city or even or any evidence that the boggy land that Oxford sits on was of any interest to them at all!

Aside from the legend of Frideswide, the first time Oxford is mentioned in literary works is The Anglo Saxon Chronicle of 912AD when Edward the Elder chose ‘Orsnaforda’ as a settlement where the Saxons would stop the Vikings moving west. The image (left) shows how over the course of the 9th Century the Vikings slowly took over Eastern England. Oxford sits right on the border between these fought over lands.

A University is Born:

King William The Conqueror put an end of Saxon and Viking rule in England, as well as establishing a strong connection between the English Monarchy and inherited lands in France. In the 13th Century the English monarchy started to gain land in the South-West France when King Henry II married the Ex Queen of France Eleanor of Aquitaine. It was this exact fighting over French lands that caused King Henry to forbid any English students studying at The University of Paris. In 1167 English students flocked to Oxford as a quiet place where they could continue their studies in piece without upsetting too many locals, but their plan ultimately failed!

Conflict between the ‘townies and gownies’ was ultimately why the college system was formed at Oxford. Colleges were eductational institutions to protect, feed and offer learning environments and facilities for the students. Today there are 38 colleges of all different sizes and subjects, but originally there were only 3 set up in the 13th Century.

Today Oxford is one of the best universities in the world as well as being home to a thriving city full of energy and life. Many colleges openly welcome tourists to peruse and take pictures of their old buildings, which has become increasingly popular for Harry Potter fans in search of filming locations. Aside from this, literary fans of Lewis Carol, J.R.R. Tolkien, C.S. Lewis, Dr. Seuss, Oscar Wilde, T.S Eliot and many more come here to see where much of the inspiration for their books originated.

For inspiration on things to do and places to see in Oxford, browse the links below to find out more about these great attractions.

This building was once home to Britain’s oldest museum – The Ashmolean Museum. Today it is dedicated to The History of Science and houses the formula’s written by Albert Einstein to explain the rate of the expansion of the Universe!

It’s also free to enter so well worth a visit!

St Mary’s was at the heart of the growing medieval university, serving special occasions such as the awarding of degrees, as well as services.

It’s well worth climbing the church to see ‘The City of Dreaming Spires’.

Aside from the city’s vast history with the university, much less well known is the castle which actually pre-dates the University! If you’re a big fan of Medieval Castles or even just want to get a great view of the city, this is worth a visit!

Divinity School is the oldest university building in Oxford, dating back almost 600 years! It was used as McGonagall’s classroom in the Goblet of Fire, as well as Hogwart’s Hospital in The Philosopher’s Stone and The Chamber of Secrets.

Entry is just £2, or can be combined with a tour of Duke Humphrey’s Library upstairs to see where Harry stole a book using his cloak of invisibility!

Despite its name, New College was founded over 600 years ago, but its name was already taken by Oriel College. This college is one of the best examples of a medieval college and doesn’t receive as many visitor’s as Christ Church. The cloisters were used during The Goblet of Fire when Mad Eye Moody lost his temper with Malfoy and turned him into a ferret!

Christ Church College is by far the most popular and famous college in Oxford.

The dining hall was intended to serve as Hogwart’s Great Hall, but instead was taken as the inspiration where they would rebuild it in The Warner Bros Studios in Leavesdon. Some scenes were kept, like the ‘welcome to Hogwarts’ speech McGonnagal makes in the first movie. 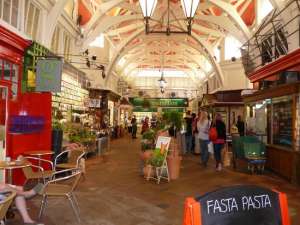 If you’re looking for an eclectic mix of local craft shops, food and drinks this is a great place to start. Even just an amble through the indoor market is recommended for its unique architecture which dates all the way back to the 1770’s!

The Eagle and Child: 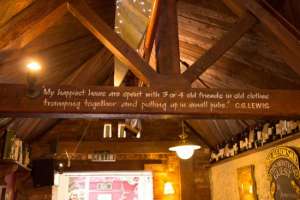 This iconic pub was once the gathering place of J.R.R. Tolkien and C.S. Lewis when they were part of a literary group known as ‘The Inklings’. The spot where they used to gather every day is called ‘The Rabbit Room’ and can be booked out for a nice pub lunch when visiting the city. 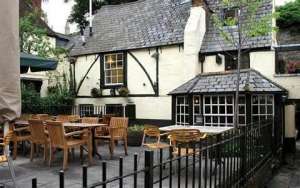 Sticking with the pub theme, it’s no secret that Oxford graduates loved a tipple whilst studying! Many famous Rhodes Scholar’s including Bill Clinton were often seen at The Turf Tavern… even the famous ‘I didn’t inhale’ moment of Clinton’s time at Oxford was recorded here!

Intersted in visiting Oxford? take a look below at our tour to Oxford and The Cotswolds, where you can create your own timings and see all of these wonderful attractions:

Oxford and The Cotswolds