It may come as a shock to you that we actually know very little about William Shakespeare’s life. Other than his 37 plays, 154 sonnets and several other poems, it seems that Shakespeare never kept a diary so everything we know about him comes from his words.

As I’m sure you can imagine, growing up in the 16th Century was very different to today. There was no midwifery or hospitals to take care of births and raising babies, which is why people like Shakespeare was one of 8 siblings! Tragically, both of William’s older sisters died in infancy, which wasn’t uncommon for the time we’re looking at. This is why children were often baptised within a few days of being born. Catholic beliefs of the time stated that if I child died before entering the Christian world, they could not pass to Heaven or Hell. Instead, they would pass into children’s limbo, known as ‘Limbus Infantum.’ Therefore, Shakespeare would have very likely been born on the 22nd, 23rd or 24th April 1564.

Growing up on Henley Street in Stratford-Upon-Avon, William was no stranger to the nearby villages of Wolmcote and Snitterfield where his parents John and Mary were from. His mother’s maiden name was Arden, a common name in that area as the whole area was known as the Forest of Arden. In 1599, Shakespeare wrote ‘As You Like It’ and vividly describes the fantasy woodland set in the French Forest of Ardennes, but as far as we know he never left the country? Likewise, the Athenian woods of A Midsummer Night’s Dream and the ‘mighty oaks’ of the Merry Wives of Windsor all imply that Shakespeare was inspired by the local woodland he grew up in Warwickshire, but simply changes the settings in many of his comedies.

John Shakespeare was a local glove maker and wool dealer, and most certainly would have been well known throughout town. In William’s teenage years, he would have witnessed his father go from top to bottom in terms of town reputation. In his heyday, John was appointed as an ‘Alderman’ and a “Town Baliff’, but his trustworthy nature seemed to have cost him dearly when people owing money didn’t pay up. John was stripped of his titles and became somewhat of a recluse as Shakespeare was leaving childhood. This may even be the primary reason we know that William was a fantastic salesman as well as a playwrite in London’s very competitive theatre scene.

At the peak of John Shakespeare’s town status, he would have most certainly been granted the special privilege of free eductation for his sons. Whilst we have no documentation to prove William’s attendance at the local King Edward VI Grammer School, it is generally believed that his deep knowledge of Monarchial history stemmed from his early eductation.

Shakespeare’s relationship with his wife Anne Hathaway is probably the most debated subject about the famous bard. How did they meet, was he forced into marriage and why did he leave Stratford are all common questions which to be honest will never be fully answered. Anne Hathaway was 26 years old when she met William; 8 years his senior and in 16th Century standards ‘beyond her prime.’ She was from a very wealthy family in the nearby Hamlet (small village) of Shottery, which could have resulted in disgrace for the Hathaway’s if Anne gave birth without being married. We know Anne was 3 months pregnant when they got married, so perhaps this is a sign that the marriage was arranged for this reason. Two and a half years later Anne is once again pregnant with twins this time; Hamnet and Judith. That’s when rather bizarrely William packs up and leaves Stratford for 7 years; a time simply known as ‘the lost years.’

Shakespeare was part of a group of actors known as ‘The Chamberlains Men’, with whom he eventually set up a theatre called The Globe. The original Globe Theatre was unfortately burnt to the ground when a canon misfired and hit the thatched roof, but a great replica sits on the Southbank of the River Thames today for people to visit. The original globe was located slightly further south of the replica, and was one of many theatres that offered intense competition for sales. London’s Southbank wasn’t the entertaining walk of pretty streets and pubs that it is today, in fact it was quite a rough, violent scene where people would cross the river for a bit of wild fun. Shakespeare’s art was his ability to engage two entrely different social classes, from the ‘penny stinkers’ (poor people that paid a penny to stand in the middle and watch a performance) to the upper echelons of society. In his plays, he had to have a basic entertaining story that the illiterate could understand and enjoy, whilst at the same time offering the much more deep and meaningful messages that we study today.

Whilst we can never truly know what Shakespeare was thinking when he wrote his plays, certain messages and times in his career suggest that his personal life had a large factor in the order of his works. For example, his early histories that make him famous are probably drawn from his eductation and lessons attending school and church services. This is followed by stories engaging his local countryside we mentioned in the ‘Early Inspirations’ part of this page. We see a huge swing from Histories into Tragedy from 1598, which begs the question why?

Shakespeare’s only son Hamnet dies at the age of just 11 years old in 1596. This tragic moment in his life seems to bring William’s attentions back to Stratford as he ends up purchasing New Place a year later. What is more, Shakespeare writes King John in 1596, which contains a monologue about Constance and the loss of her son Arthur:

“Grief fills the room up of my abscent child”

So it seems Shakespeare’s literary works can tell us more about his own thoughts and feelings, as well as perhaps incentives to increase his companies status. Many people believe that ‘Macbeth’ may have been written to please the new Scottish King James I. If this was the intention, we have to say that it worked, as King James ends up buying The Chamberlains Men in 1603 and creating a new theatre company called ‘The Kings Men’.

By the time Shakespeare had reached his mid 40’s, he began to spend a lot more time at his home in Stratford. His relationship with his eldest daughter Susanna seems to have been very strong, as he leaves her his very expensive home in his will. Rather surprisingly, he leaves his wife ‘the second best bed with the furniture.’ Could this be yet another sign that Shakespeare’s marriage wasn’t right from the start, or was this a romantic sentiment to leave her their own bed, as the ‘best’ bed of the house was reserved for guests?

We will never truly know about what inspired Shakespeare to become a playwright, but that my friends is the beauty of the story!

To call this building a ‘cottage’ is quite a misnomer. This 16th Century cottage was Anne Hathaway’s childhood home, and is protected today by The Shakespeare Birthplace Trust. It’s a great way to get a feel of what a typical thatched cottage looks like from the inside, but of course on a much larger scale!

This is by far the biggest and best attraction that Stratford has to offer. Here you will see everything from the room Shakespeare was born in, his first folio, his father’s workshop and live performances from a group of actors known as ‘Shakespeare Aloud’. We would recommend spending at least 45 minutes at this attraction

Today it serves as a museum, where the garden has a variety of plant life to demonstrate John Halls unusual medicinal practices of the 16th Century.

New Place was the home of William Shakespeare from 1597 until his death in 1616. Unfortunately the building was destroyed by the reverend that lived here in the 18th Century, sparked by a fight over a mulberry tree!

Just a short drive away from Stratford is the house where Shakespeare’s mother lived before she met John Shakespeare.. or so we used to believe. It actually turns out it was Mary’s neighbours home after it was purchased by The Shakespeare Trust in 2000.

On the far end of town by The River Avon lies this magnificent medieval church. Dating back 800 years, it still looks similar today as it would have when Shakespeare was alive. This was the sight of his baptism in 1564 and he is buried here today with the inscription:

“Blessed Be The Man Who Spare These Stones, Cursed be He Who Removes My Bones”

Conveniently located opposite Shakespeare’s Birthplace on Henley Street, this cafe can get very busy during peak season. If it’s not too busy and you fancy a toasted sandwich with chips, or even a cup of tea and a scone, this is a great place for a quick bite to eat. This is Stratford’s oldest pub. If the Tudor Framed exterior isn’t enough to lure you into this pub, the food certainly will. It’s got a great selection of British pub food if you’re looking for anything from fish and chips to traditional pie and mash.

If you’re in Stratford for lunch and want something a bit more filling, we’d recommend giving The Garrick Inn a try! 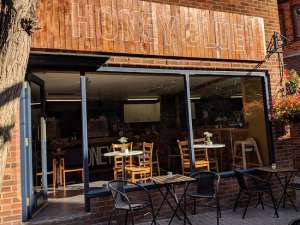 Ranked number 1 on TripAdvisor, this cute little cafe serves an incredible cup of coffee, alongside a small but great menu, including gluten free options..

If you want something that’s quick, good value and great quality, Honey Blue is the place to go!

Intersted in visiting Stratford on one of our day tours from London? take a look below at a selection of our best selling tours:

Stratford-Upon-Avon, Oxford and The Cotswolds